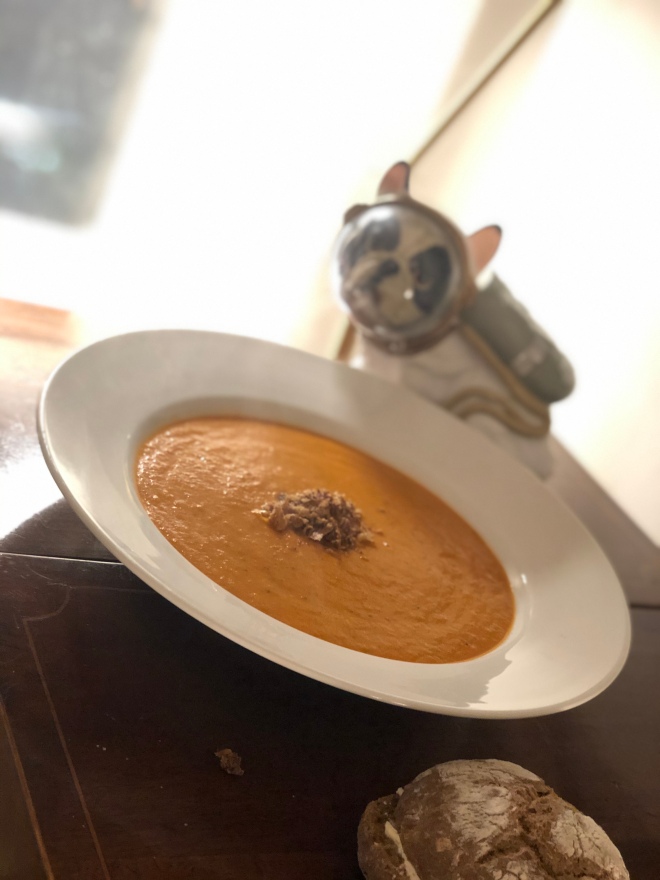 Happy 2021! Apologies for my radio silence – Covid19 got me and I was laid up for a few weeks with a hacking cough, sweats and absolutely no sense of taste or smell. My senses are back, but I wanted to stimulate my taste buds more… And this is where Venus came, not for the first time, to my rescue.

I first met Venus nearly 20 years ago when I was working for BBC New Media out of Bush House. In short she is a powerhouse – she leads by example, nurtures her team, cares deeply and is the ultimate media professional having led some big BBC digital projects to great success. Like many women at the BBC she had to suffer the misogyny and bullying which came with the territory back then and she dealt with it with magnificent elegance and no nonsense. She shines as an example for us all.

And this soup is her creation – I saw a picture of it on her Facebook timeline and started salivating, so I reached out and she shared the recipe. What I love about this recipe is that it has a short story behind it which is full of love, support and warmth. It’s very Venus, so here’s the story in her words.

“My partner has type 2 diabetes and wanted to sort out his nutrition, lose some weight and get into shape.  We decided to go on the NHS Diabetes Diet – Mainly 800 calories a day consisting of 2 shakes and a soup.  We tried their soup recipes, but after a couple of weeks we got bored, so I started creating new ones.  This one has been crafted over a couple of months.”

This soup is an absolute BANGER! It’s rich, velvety with the weight of garlic (you should be thinking that’s a lot of garlic… this is a good thing) and packs as much punch as you’d like with the addition of chilli flakes. It also looks so beautiful at every stage of preparation/cooking, a real symphony in red.

Oh, and word to the wise, don’t monkey around with this recipe. It’s perfect the way it is. Just serve it with a heavily-buttered crusty roll and a garnish of your choice (I used crispy onions)

Music to listen to while preparing this dish: ‘Ex’s & Oh’s’ by Elle King